Cimbria has secured the biggest order in the company’s history in connection with the delivery of 23 grain silo plants to Egypt. This order is considered to be the world’s largest order for grain silos, with a total storage capacity of 1.38 million tonnes and a value of more than 100 million US dollars.

Financing of this huge project has been provided by the United Arab Emirates to the Government of Egypt to support the development of the country. Furthermore, the two countries agreed that the Egyptian Engineering Authority of Armed Forces and the Administration of Military Works should select the main contractors and control and supervise the entire implementation. Cimbria was competing against companies from China, India, Turkey, USA, Canada, Germany and the United Kingdom for mechanical-electrical works. In the end, Cimbria was selected and subsequently negotiated sub-contracts with Arab contractors for 15 plants, Petrojet for 4 plants, Samcrete for 2 plants and Misr Concrete Development Co for the last 2 plants.

The order comprises project design and engineering, supply of conveying equipment, cleaners, dust filter systems, weighing equipment, laboratory equipment, silos, electronic control system featuring SCADA / PLC, inventory recording system with scanner in each silo, sufficient spare parts for 3 years of operation and delivery to Egypt. The project also includes supervision of the equipment, silos and electrical systems at the 23 facilities. Following installation, Cimbria will embark on a training programme in which 20 Egyptian employees at each plant will receive instruction in operation and maintenance. Final capacity testing will also be performed prior to handing over the many new plants. Each of the 23 plants has a silo capacity of 60,000 tonnes, including conveying and cleaning facilities with a capacity of 200 tonnes per hour. Total silo capacity will thus amount to 1.38 million tonnes.

Geographically, the locations of the 23 plants stretch from the Mediterranean Sea and Suez all the way down to Aswan, in addition to a plant at an oasis 600 km west of Aswan.

Egypt has a high consumption of grain: it is the world’s biggest importer of wheat and has an annual import of 17 million tonnes of different grain products. Furthermore, local production takes place on 4% of Egypt’s rural land, primarily in the Nile Delta and areas along the Nile down to the Sudanese border, corresponding to a total production of 23 million tonnes of a range of different grain products.

Of the 23 plants being delivered, Cimbria will be supplying 12 facilities for The Egyptian Holding Company for Silo Storage under the Ministry of Supply & Home Trade, which will primarily be used as a buffer and intermediate storage facilities for imported wheat. 10 facilities will be erected for the Principal Bank for Development & Agricultural Credit under the Ministry of Agriculture and Land Reclamation at various locations throughout the country to which farmers can sell and deliver locally produced grain. Currently, a substantial part of the grain received by the Ministry of Agriculture is stored outdoors, which results in enormous losses. The new silos will replace such open bag storage facilities. The final facility is to be delivered to North Cairo Flour Mills Co. as a buffer for its flour mill.

Cimbria’s project department has a staff of 180 employees who are responsible for a range of functions, including sales, project design and engineering, delivery, assembly and after-sales service. Project design has been completed; production of the many plants has been ongoing since spring 2015 and will be completed in February 2016. The complete shipment will eventually fill around 500 40-foot containers packed with equipment and another 800 containers with round steel silos. Delivery began in July 2015 and will continue until early spring 2016. By the end of 2015 about 80% of all shipments will be completed. Supervision of installation at most of the sites is in full progress following training and commissioning.

The last 25 years have seen Cimbria delivering an almost uninterrupted succession of grain facilities to the country, with more than 40 reference plants having been completed to the satisfaction of customers. These reference plants have proved to be invaluable in connection with negotiations to secure this gigantic new order. Since 2012, Cimbria has had its own sales office in Egypt, and its staff have played a huge role in winning this order. Cimbria’s solutions within silo plants are recognised for their ability to ensure the highest possible efficiency in essential grain crops, as well as minimising losses – a crucial factor in Egypt, since much of the locally produced grain is stored in open outdoor sack storage facilities, with enormous losses as a consequence.

From left: Henning Bukh, Cimbria, and Ahmed Eissa, Arab Contractors, during the signing of the contract

Open bag storage - before the delivery of steel silos 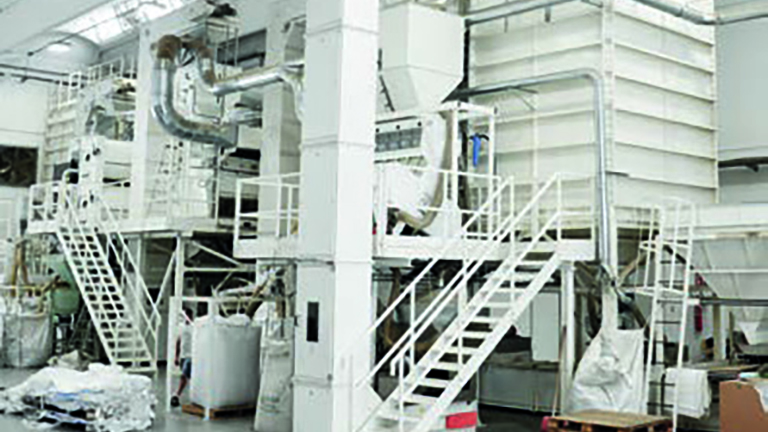 We use cookies to improve and customize our sites and services. This includes cookies from third party social media websites, which may track your use of our website. If you continue without changing your settings, we'll assume that you are happy to receive all cookies on our website. You can change your cookie settings at any time. Learn more